Layoffs for Workers, Millions for Execs

Despite taking huge raises and bonuses for themselves, UMMS executives announced layoffs to staff in June 2013. If you are an UMMS worker facing layoffs or workplace issues, call our hotline at 877-434-1011 or contact us by email at info@ummscodered.org or through the Contact Us Page on this website. All information is confidential.

A Climate of Fear for Union Elections at UMMS When caregivers at the University of Maryland Medical Center in Baltimore—the flagship hospital of UMMS— had an opportunity to vote to join a union in 2012, they were met with threats, harassment, suspension and even termination. UMMS executives spread false and damaging information to workers at mandatory meetings, giving workers the impression that their vote would not be confidential.

Executives at the hospital created a climate of fear and intimidation. Employees were afraid to talk to one another about the union. We did not know what would get back to management. While we did not know exactly what the consequences would be for talking about the union, we knew we could face retaliation.” —UMMC worker testimony to Maryland General Assembly March 2013

On December 23 2012, an independent arbitrator found that UMMC officials, including CEO Jeffrey Rivest, made “potentially misleading comments” to employees at two mandatory meetings that management held about union organizing.

Those comments concerned whether or not management would see the union authorization cards that UMMC employees signed. In fact, management is not allowed to see those cards. However, as the arbitrator ruled, the comments by Mr. Rivest and others “are capable of having
created misimpressions” that contributed to “reasonably widespread concern from employees as to the secrecy of their ballot.”

Because UMMC exists in a legal limbo — neither federal nor state labor laws apply to the quasi-public hospital — workers had no protections. UMMC is the only hospital in the state where workers do not have basic labor protections.

The charge nurse, who is in effect our supervisor, warned us that there could be no discussion of union organizing during work hours. She said that she had been told by a manager to relay to us that there could be no talk of the union at our stations, in the hallways or elevators. She added that we could talk about the union only on our break inside a break room, or if we clocked out altogether. She said that talking about the union at any other time or in any other place would result in disciplinary action.”  —UMMC worker testimony to Maryland General Assembly March 2013

Support for the Equality for Maryland Caregivers Act 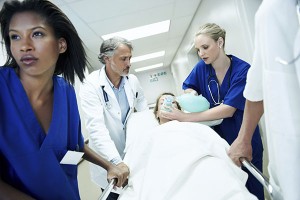 Despite the lack of labor protections, several UMMS workers stepped forward to provide testimony in support of the law. In April 2012, a partial victory was won when the proposed legislation was accepted for summer study. It will be reintroduced when the legislative session begins again in 2014.

Because of some oversight, me and my co-workers and are without the basic protections and structure that the National Labor Relations Act has provided other workers for more than 75 years.  We have no ability at this time to petition any state or federal body for union recognition or even to seek any protection to collectively address concerns.   I understand that we are the ONLY hospital workers in this state that do not have this protection and this exemption just doesn’t make good sense and is not right.” —UMMC worker testimony to Maryland General Assembly March 2013

A Call for Free and Fair Union Elections

Beginning in 2009, the Maryland/DC region of 1199SEIU United Healthcare Workers East launched The Heart of Baltimore campaign to advocate for free and fair union elections for the city’s healthcare workers. The central tenant of the campaign is that one in five Baltimore jobs is in healthcare, so raising living standards for caregivers will expand the middle class, boost the local economy and bring about a revitalization of the city.

A free and fair election means that employees are free to decide whether they want to unionize in a fair secret ballot vote. Management, rather than interfering, respects this decision.

Free and fair election agreements often include the following guidelines:

In 2009, 21 percent of all Baltimoreans lived below the poverty level and Baltimore’s caregivers, such as nurse’s aides, made less per hour than the same workers in other major East Coast cities. Also, the rate of healthcare workers without health insurance was 73 percent higher than for other workers in Maryland and Baltimore caregivers were 2.5 times more likely to be on food stamps than other workers in the state.

The campaign was supported by a Baltimore City Council resolution and attracted celebrity endorsements from actors Danny Glover, Anne Deavere Smith, Charles Dutton and Louis Black. A highlight of the launch was an historic rally in 2010 that drew hundreds to Mount Vernon Square in Baltimore.